Digging in the Kemmerer Wyoming area fossil fish quarries is a great way to spend a few days in the heat of the summer. The quarries are productive, and you have several choices to pick from, depending on how comfortable you are with your skills lol. This page is partly a chronicle of my adventures in the area but also a guide to the best digging areas and techniques that will get you the most fish for your time and $$.

From the National Park Service comes this bit of scientific wisdom:

This 50-million year old lake bed is one of the richest fossil localities in the world. Recorded in limestone are dynamic and complete paleoecosystems that spanned two million years. Preservation is so complete that it allows for detailed study of climate change and its effects on biological communities.

Well, it ain't limestone. So much for the government geniuses. Here's the real scoop from Fossil Museum:

Class actinopterygii, the ray-finned bony fishes, comprise almost half of all known species of vertebrates, some 20,000 extant species. There are numerous locations worldwide that are noted for wondrous preservation of bony fishes, and the Green River formation that covers some 25,000 square miles of SW Wyoming, west Colorado and east Utah is one of them. The formation is one of the largest lacustrine (i.e., lake) sedimentary accumulations in the world, averages some 2,000 feet thick, and spans the period 40 to 50 million years ago during the Eocene Epoch of the Cenozoic Era.

The Green River Formation is actually a heterogeneous complex of lakes differential in ecological, geological characteristics, timeframe and hence fauna and flora. The complex comprises three primary lakes formed as a consequence of drainage from tectonic highlands envolved in the uplift of the Rocky Mountains during Tertiary time. Fossil lake, centered in Southwest Wyoming, is the smallest and appeared briefly during the early Eocene. The Lake Gosiute deposits span the period from Lower to Middle Eocene, and the largest deposit from Lake Uinta that ranges across the Utah-Colorado border, spans most of the Eocene Epoch.

During the Eocene, based on the fossil record, the region was sub-tropical to temperate. Some 60 vertebrate taxa have been described from the formation, as well as abundant invertebrates and plants. Green river has been noted for its well-preserved fish since mid-way through the 19th century. The unusually excellent preservation of the Green River fish fossils is usually attributed to a combination of two factors: 1) a cold period during the Eocene that would have caused dead fish to sink faster due to a less inflated swim bladder; and 2) the great depth of the lakes and the consequent anoxic conditions that would have often prevented scavengers from disturbing the carcasses.

The majority of fish fossils are taken from the Fossil L area from two layers: 1) the so-called 18-inch layer; and 2) the spilt fish layer (aka the F1 layer). The best preserved fish come from the 18-inch layer. Because the sediment is highly laminated, the fish can often be removed nearly whole. This layer, in the area near Fossil Butte, does indeed average about 18 inches in thickness, and represents some 4,000 (years) of deposition. The composition of the limestone (actually oil shale - where do they keep getting limestone from?) indicates that the layer was formed in deep water far from shore. By contrast, the so-called split-fish layer is unlaminated making extraction and preparation of the best fossil fish far more difficult. The layer is about six feet thick, and the fauna indicates water that was better circulated than that associated with the 18-inch layer. Some 19 genera of Eocene fish come from the Green River formation.

Here is a diagram of the stratigraphy of Fossil Lake, the unit that the Kemmerer quarries are located in. The "sandwich beds" are better known as the split-fish layers. 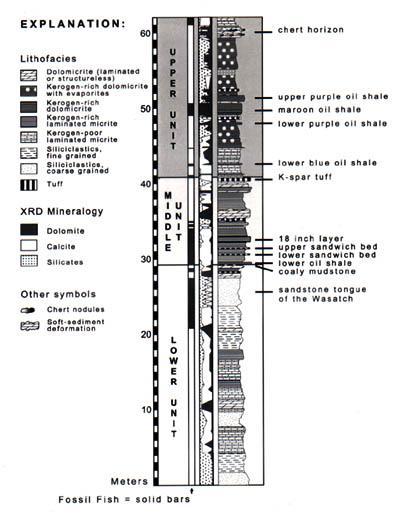 Of course the coolest thing about the Green River formation is the fossils themselves. I suggest you start your visit at the Fossil Butte National Monument on Highway 30 west of town; they have a tour and great fossils and information in the visitor's center. June-August, Visitor Center Hours 8:00a-7:00p; Winter Visitor Center Hours 8-4:30 (September through May). Closed winter Holidays.

Here are some fish from my and other collections; you won't find many of these but the Knightia and Diplomystus are extremely common in the quarries, while Prisacacara, Phareodus, and Mioplosus are fairly common. Stingrays, gars, bowfins, etc. are so rare you will probably only see parts lol. The Diplomystus dentatus, was a large predator, up to 26", but most you will find are juveniles, common up to 6" or so. 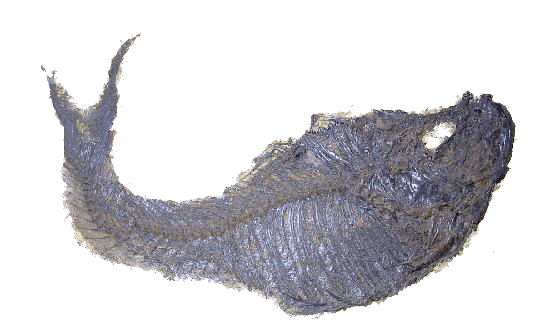 This adult Diplo is mine from the 18-inch layer and is about 14" long.

This is Knightia alta, relatively common in the quarries. It's a small herring that swam about the deeper parts of the lakes eating plankton in huge schools. Every other fish ate them lol. This one is from Warfield's old quarry in the F1 layer south of town.

This is Knightia eoceana , extremely common in the quarries. In fact, 95+% of the fish you dig will be these. It's a herring too and every other fish except Knightia alta ate them :) This one is from Warfield's old quarry too. 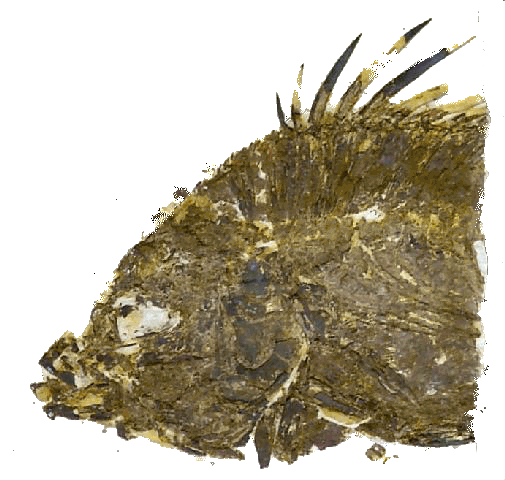 This is the head of a large perch, Priscacara liops ("Prisky" to the diggers - it's easier to pronounce :). They grew up to 15" long and ate snails, crustaceans, fish, and probably just about anything else. This is a good example of why you need to keep track of where you are in the layers; the diggers who found this will recover the rest of the fish as they get deeper into the rock. From Charlie Nunn's quarry. 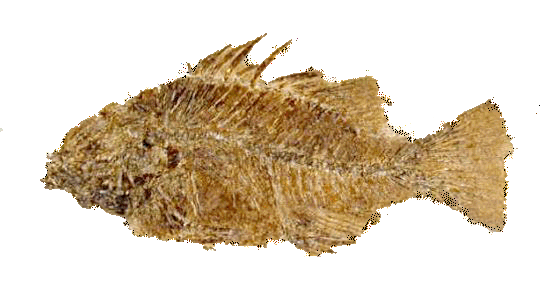 This is a juvenile Priscacara serrata from the 18-inch layer.

This is my Priscacara hypsacantha from Nunn's quarry. They preyed on ostracods (aka fairy shrimp). They are relatively common in the quarries. 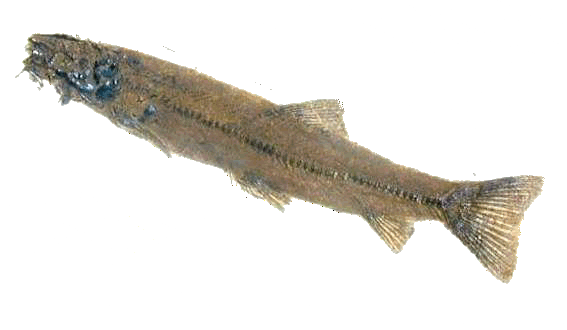 This is a sucker, Notogoneus osculus, closely related to living suckers. They must be pretty rare because I have never heard of one from the split-fish layer.

Mioplosus labracoides, a predator that grew up to 20" long. Yikes! From the 18-inch layer, and I wish it was mine but it's not!

And this is the fearsome Phareodus testis, the coolest fish in the quarries (IMHO). They are related to the Amazonian arrowana and they ate FISH! I have a 14" one that I found at Warfield's old quarry south of town. You will find many exploded fish in the quarries (aka "Explodeodus"!) but very few whole ones. If you do find a whole one be prepared to pay a couple hundred dollars for it.

Lepiosteus atrox, an extinct gar. These are the prize fish of the quarries and grew up to 66" long! There are a few beautiful gar at all the galleries in town and at the monument. They ate anything that moved. If you find one don't expect to keep it unless you are willing to pay big money for it. As in thousands of dollars. Many thousands :( 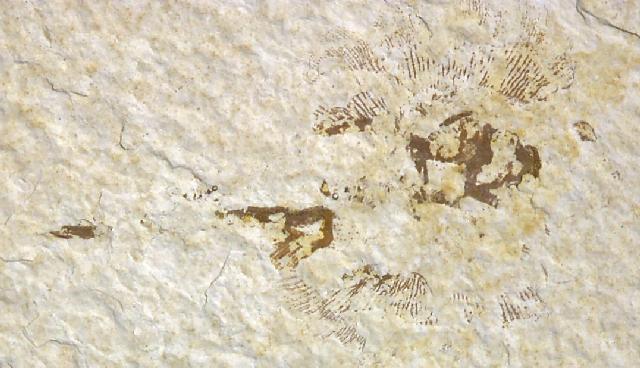 A juvenile Heliobatus, a freshwater stingray, from Nunn's quarry. I doubt you could buy the adults for less than $500 if you are share or fee digging. Rays are a prize fish at the quarries and practically all the fee dig places take them. I think that $750-$1000 is a fair deal if you dig one yourself and want to buy it. They are usually $2,500 - $5,000 retail. 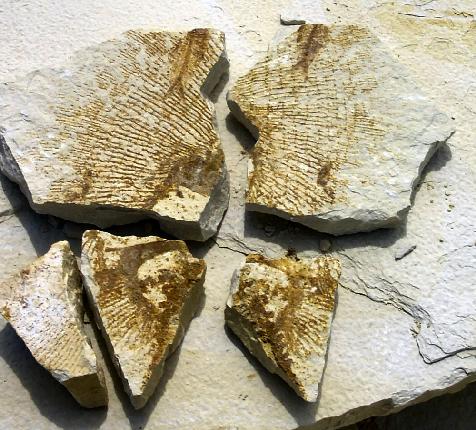 Bits & pieces of a Heliobatus stingray. They probably didn't find all of this one, which is a shame because it's a killer fossil!

After the National monument, visit Ulrich's Fossil Gallery (the quarry is visible east on 30 a few miles, on the right) to see their fossils. You can dig there but you don't get much for your money and it's highly supervised. In other words you dig the small, cheap fish and they dig the big, nice ones. The dig starts at 9 a.m., every day Memorial Day to Labor Day. You are allowed to recover 6 - 8 complete fish which you can easily do in the time allotted, for $55. A $65 fee allows you to collect all common specimens except those designated as rare and unusual by the State of Wyoming to include stingrays, gars, birds, all mammals, etc. You would be allowed any and all sizes of Mioplosus, Phareodus, Priscacara, Knightia, Diplomystus, Notogoneus. Pay the extra $10 just in case. If you go cheap and find a nice fish you will want to shoot yourself, trust me. While Ulrich's is not exactly my cup of tea, if all you want is a few fish without paying $20 each, this one is for you.

Warfield's Fossils has a fee dig quarry north of town. They used to have a great F1 quarry south of town at Warfield Springs; some pics of the quarry are below. It was a great place to camp out & get away from it all. Unfortunately they closed that quarry to fee digging for reasons unknown to me and opened one right next to the share dig quarry that I dig at. They are open from Memorial Day weekend until August 31st. Hours are from 8am to 4pm 7 days a week. Reservations are NOT needed for groups UNDER 10 persons. It is $75.00 per day per digger for 1 to 9 people. It is $60.00 per day per digger For 10 or more people. It is $60.00 per ½ day per person (4 hour dig at any start time) or $25.00 per hour. Children 12 and under may collect fossils in the tailings pile at ½ price. They keep everything that you would expect them to keep. You can have all Knightia, Diplomystus, Mioplosus, Priscacara, Phareodus, and Amphilplaga. Not that I have ever seen one of the latter. 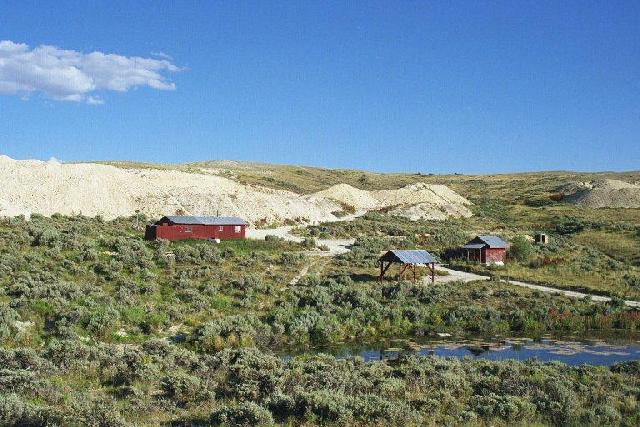 If you ever needed to cool down the springs are right there & the water was cold & great tasting! 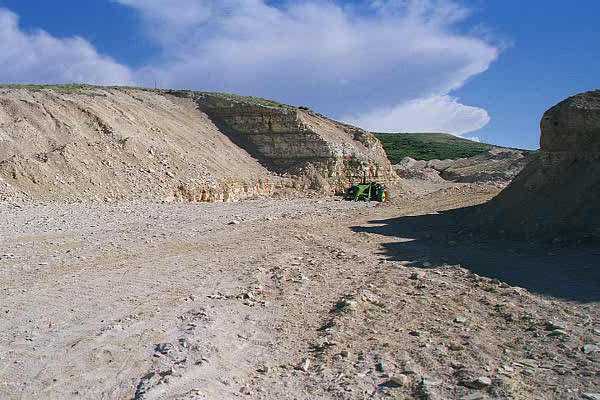 The main quarry at the springs. There was an 18-inch layer quarry there too. 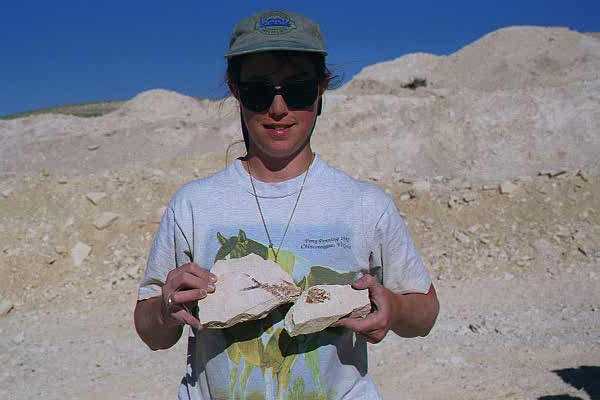 One of our first fish from Warfield's :) 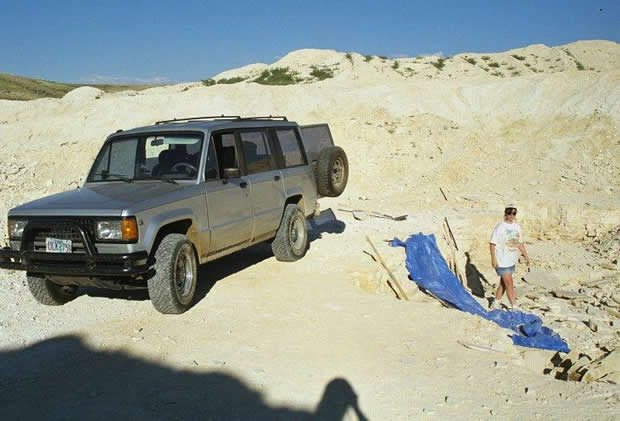 The old Pooper at the quarry. The tarp is covering a crocodile that they were working on!

If you don't like to pay to dig (I know I don't, not when I am digging for 4 or 5 days), you can try share digging. The only quarry that I know of that you can share dig at is Charlie Nunn's quarry which is just to the west of the new Warfield's quarry north of town. Follow their map but stay left at the Warfield's quarry sign; Charlie's quarry is 100 yards down the hill. I know that Antares Fossils did share digging in Charlie Nunn's quarry in the past. Some other great people whom I have share dug for are Bob & Bonnie Finney (below), Jerry Hodges, and Charlie Nunn (307 877-3641). Typically, share digging involves digging in a "section" of the quarry, which is usually 50 feet of the wall. You dig the way the owners tell you to, and split the fish when you are satisfied with what you have. As usual, rare fish must be paid for, or given to the owners. If you can work out a better deal, then go for it :)

Turn by turn directions to the share dig quarry from Kemmerer: 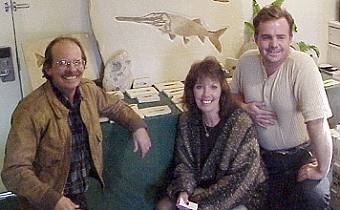 Bob (left) and Bonnie Finney, and a friend, at the Tucson show, with a Crossophilus magnicaudatus paddlefish they found

Digging tips to get the most for your time and $$

Tools you don't want to be without 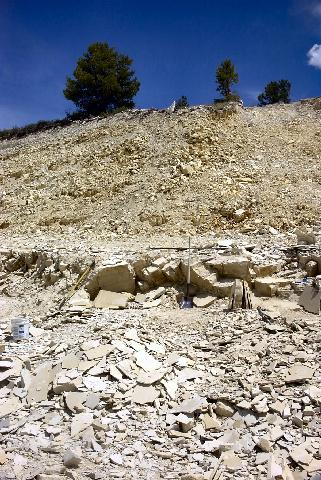 
Users may view and print this information for personal use only. Unauthorized copying or distribution of this page or any of its contents without the express permission of the author is expressly forbidden.