This Page was for the Buchanan Oregon thunderegg bed field trips. I am leaving it here as a tribute to the owner, Rod Robins, who passed away on December 1st 2012.

I am sorry to report that Rod Robins, rancher and owner of the Buchanan thunderegg pits in Burns, Oregon, passed away on December 1st 2012 at the young age of 66. Rod was a great guy, once you got to know him. He once described himself to me as “just another crazy, crusty old &*%!”, but the truth was that he was kind, fair, and generous with us rockhounds the past few years. Rod started digging the thundereggs with the “Geode Kid”, Paul Colburn, in the early 1970s. He told a story of how he came to meet Paul; as Paul was searching the ridge top on the ranch for signs of thundereggs (he had started a pit across the road which he eventually called “Secret Ridge”), Rod’s mother saw him, and the roared over to where Paul was digging, pointed a loaded shotgun at Paul, telling him to get the #^!% off my property!”. Rod intervened (he said that his mother would never have fired a shot but Paul looked like he was going to pass out on the spot), and the two became fast friends. Paul introduced Rod to the world of thundereggs, which Rod had thought were just more worthless rocks getting in the way of the cattle, and soon the two were digging eggs by hand and later with the family tractor and “blowing lots of stuff up” in the pits :)

Rod dug a lot of eggs over the years, taking truck loads to the rock shows in Arizona and dumping them on the ground for people to pick through. He opened the pits to rockhounds on and off over the years but hadn't had any groups over since the early 1980s until I talked to him and set up a trip in Sept. 2011. We met while I was taking some fellow thunder-nuts Peter Woerner from Heidelberg, Germany, and John Stockwell, from Berkley CA, to dig eggs in eastern Oregon and Idaho. We went up the ridge across the road from Rod's camp to have a look at the Secret Ridge pit (we had no idea it was on Rod’s neighbor’s property, which adjoins BLM land right at the pit). Rod spotted us and came roaring up the hill in his pickup and shouted at us asking what the hell we were doing. One look at the two rifles in his truck (for the mountain lions, he said, which was just one of his many tall tales), and I thought he was serious. He wasn't - after 5 minutes he called the neighbors and we were given permission to poke around in the pit. 45 minutes later (Rod loved to talk, and talk, and talk), and it was all smiles and we had agreed to arrange a trip for the rockhounds that September. He said he would have had people over to dig years ago but nobody had asked, something that we've been pretty successful with – most of the time we are met with cautious enthusiasm from the ranchers. I will never forget preparing for that trip, 3 days of Rod digging the pits with a rented backhoe and me running around trying to pick out eggs to toss onto piles. This was while he swung the backhoe bucket around over my head and screamed at me to get the hell out of the way while pointing to eggs for me to pick up eggs right under it! The response from the rockhounds was almost overwhelming, I gave up counting after the first 150 people the first day of the dig. After that were two more trips, Memorial Day and Labor Day 2012, both of which were well attended and very successful.

Unfortunately, the status of the ranch is now uncertain, what I do know is that the new owner hasn't granted anyone permission yet. I am guessing that the public digging is over with in the short term, and most likely has ended for the long term if we aren't successful in getting permission. All who have met Rod these past 2 years will be sad to see him go, and we owe a debt of gratitude to him for letting us have the experience of collecting his beautiful thundereggs.

SOME EGGS FROM THE SEPTEMBER 2010 FIELD TRIP

(and a couple from my collection) Truly unique and tremendous variety for a site! 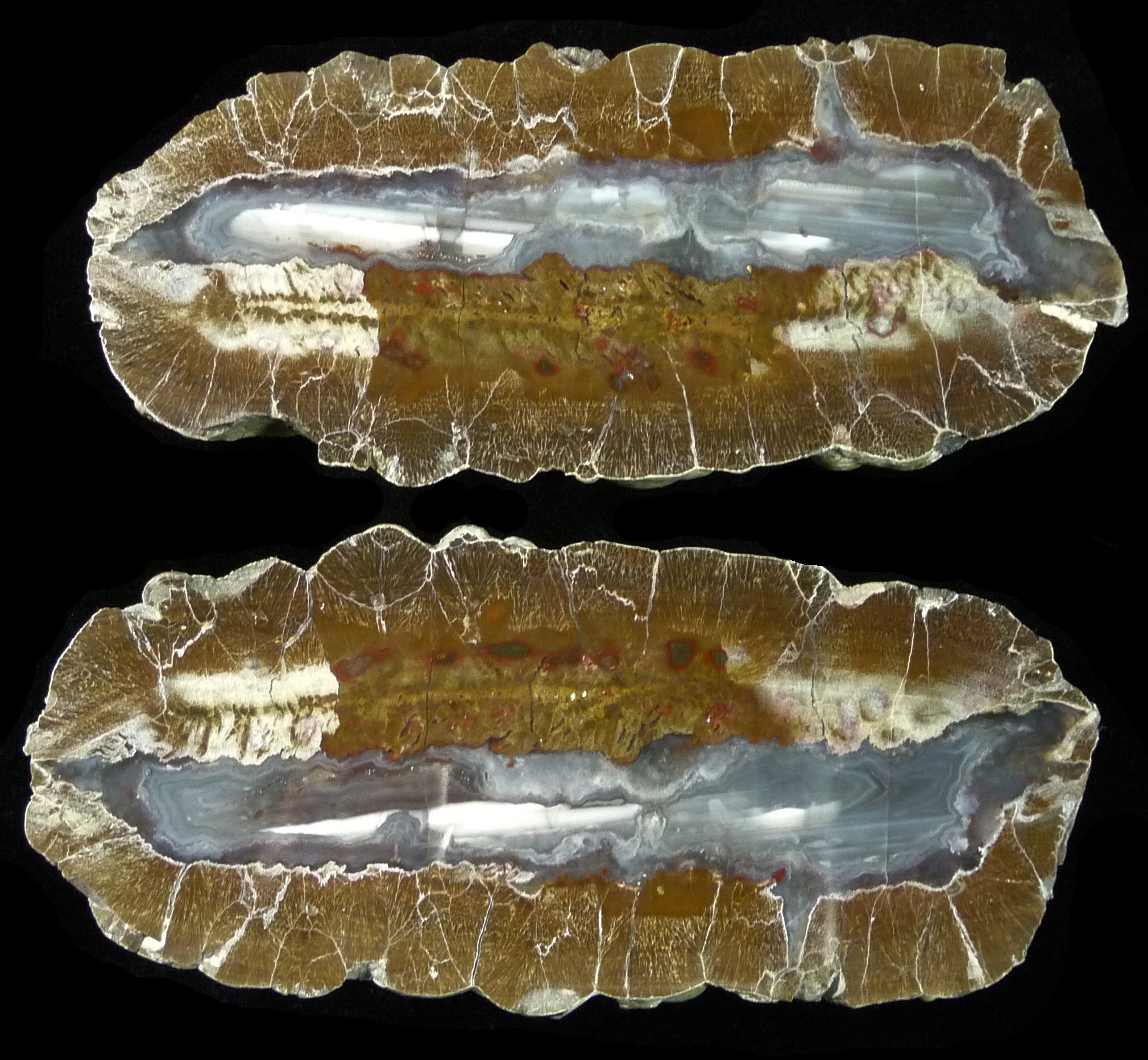